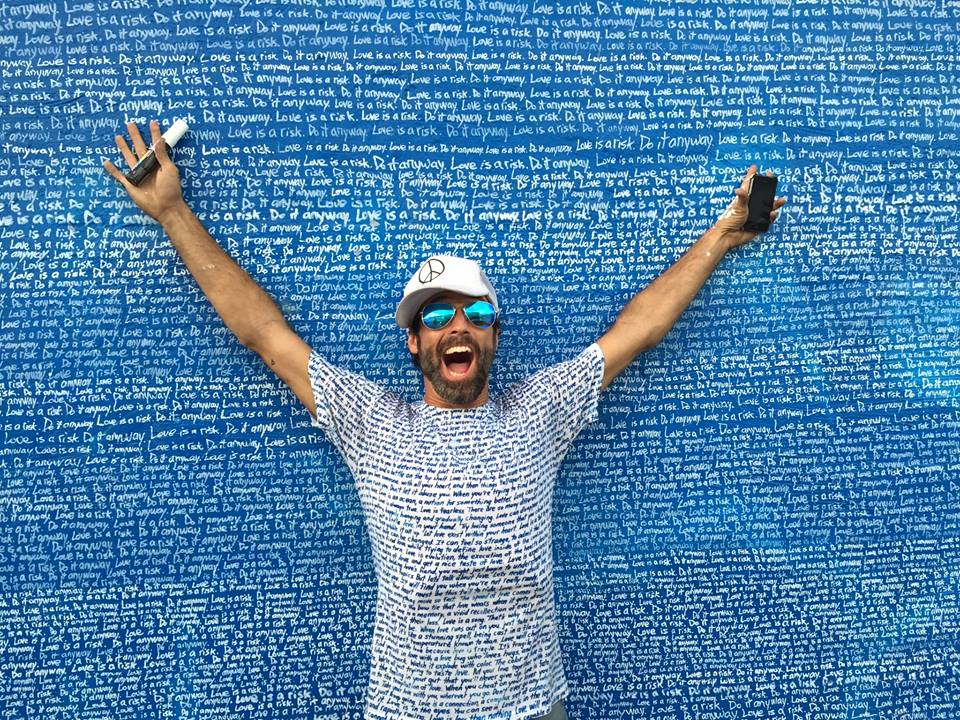 Renda Writer is an artist that has a great personality, huge smile, and a positive attitude that’s very contagious. His second #WorldPeaceMural from his highly publicized #WorldPeaceMuralTour finds its home at the corner of 9th St & 5th Ave on the south wall of the Sears Town Parking lot in Fort Lauderdale’s MASS District (Music & Arts South of Sunrise). This mural can be seen at this month’s Mass District // April FTL Artwalk, April 29th (6pm – 10pm). 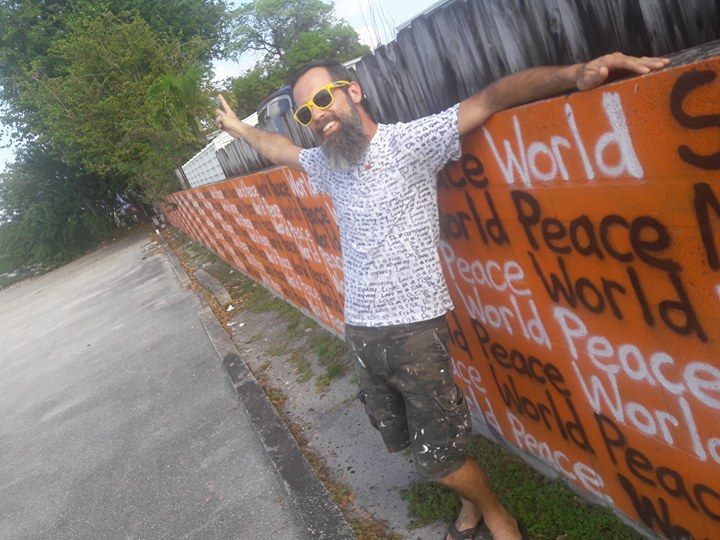 The unique delivery of the simple but proactive message #WorldPeace is described by Renda Writer as “HandWritten Art.” This mural is one of two murals that Renda has in  in the MASS District, the second is a #HandWrittenMural of the words “Your Comfort Zone Will Kill You,” written about a thousand times on a door in MASS. 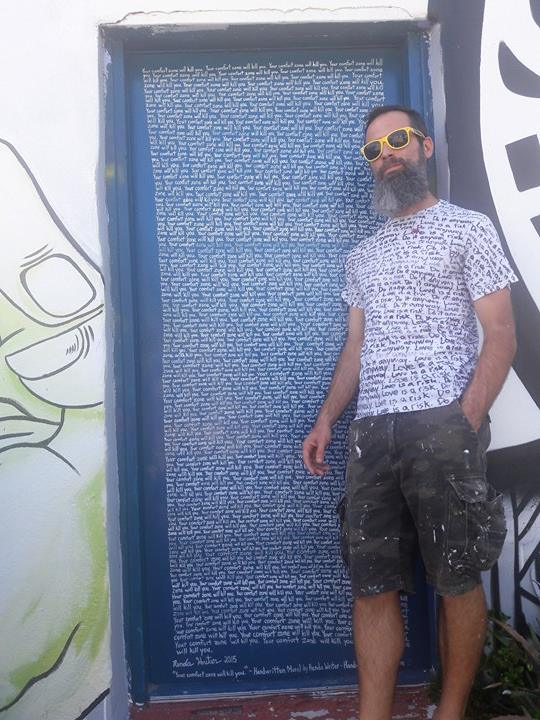 When asked when he first discovered that he was an artist, Renda, the South Florida native, replied “I discovered I was poet first, which is also a form of art”. Spending his early 20’s in New York City as a intern for Columbia Records, he worked for a marketing company selling comedy club tickets guerilla-style in Times Square. Watch this video of a poem by Renda called “The Peddler,” where he talks about his time working the streets as a comedy club promoter in NYC.

Renda realized he was a poet through his communication skills in sales. His inspiration came from the streets of New York, Hip-Hop Music, and the experiences that life brings. Soon enough Renda started performing at open mics at well-known venues such as “New Yorrican Cafe” and many others. After writing, performing, & recording countless pieces of poetry, as well as hosting & performing at open mics, Renda returned to South Florida to continue his pursuit of art happiness. Renda Writer is definitely an artist who has utilized the full potential of the internet and social media platforms to showcase and bring awareness to his art.

When asked why he started to produce art he replied “I started making art when everything else stopped making sense.” After realizing his poetry in written form was an art in itself, he began to write on anything and everything; creating pieces of art on found objects, vending, and doing art shows all throughout South Florida. 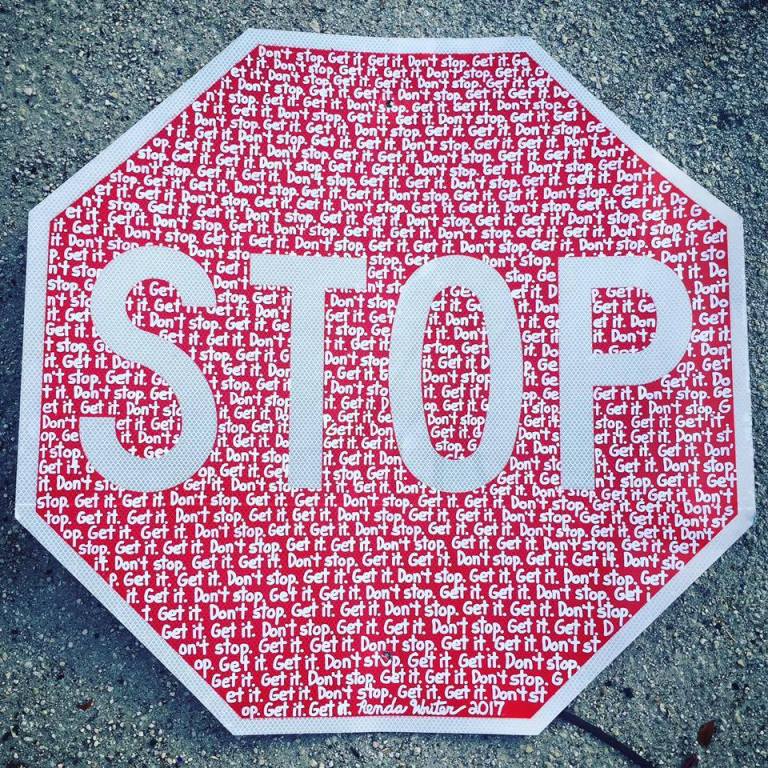 Soon after he dubbed the term “Handwritten Mural Artist,” while being comissioned for many murals for businesses throughout South Florida. One of his most famous murals was done on the facade of N’Namdi Contemporary Miami art gallery for Art Basel 2014, in the world-renown Wynwood Art District in Miami, Florida and reads: “Love Is A Risk Do It Anyway” almost 500,000 times.  Then, in 2016 he re-did the mural for Art Basel again, and this time he wrote, “I Am Love.”  Again, the mural was a viral sensation on Instagram and a popular photo backdrop for artsy selfies. 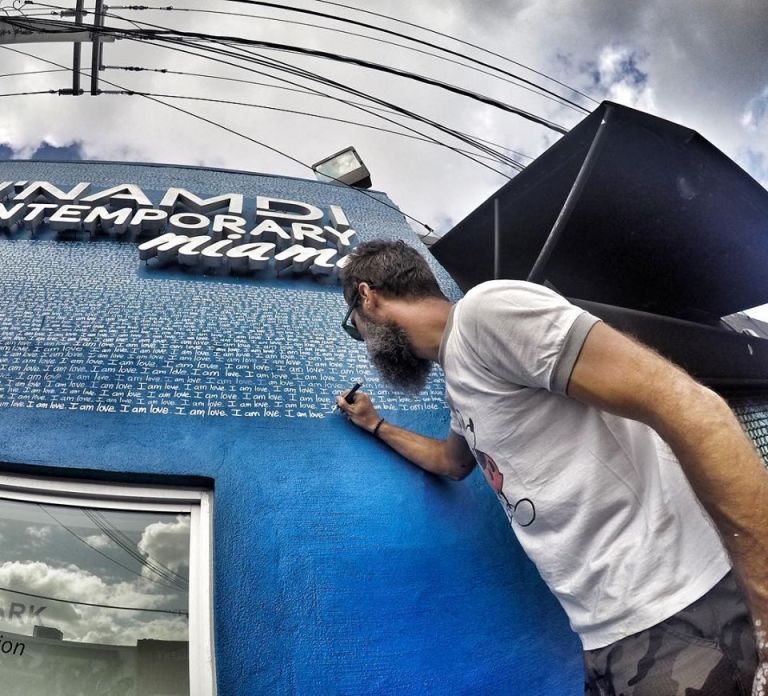 After being commissioned for Handwritten Murals all over South Florida and vending at almost every art event there is, Renda started looking for a means to use his art as a travel mechanism to create even more art, thus the beginnings of the “World Peace Mural Tour.” When asked why World Peace? Renda replied, “KRS-One has always been a major influence in my life, my art, my ideas, and my thought process. His Song “World Peace” came into my head one day and that’s when I got the idea to create the “World Peace Mural Tour.”

The World Peace Mural Tour is in full swing and its mission is simple: ” Create “World Peace” themed “Handwritten Murals” all over the world, and help to enact change through the power of the written word and the influence of public art.” 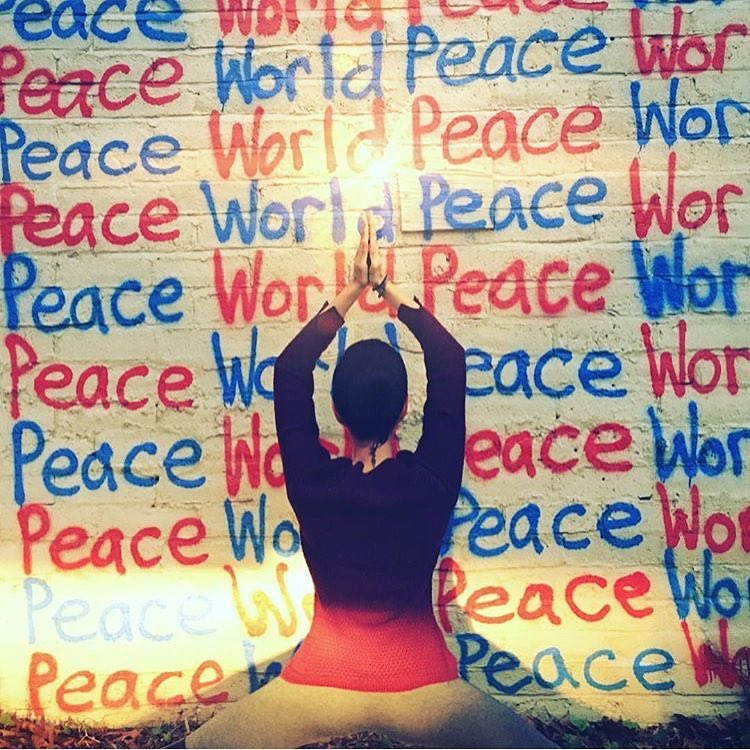 Currently there are 29 #WorldPeaceMurals all over the U.S and 1 in Mexico, Renda is gearing up for his summer 2017 tour dates. To do your part and contribute to World Peace go to https://www.gofundme.com/WorldPeaceMuralTour.